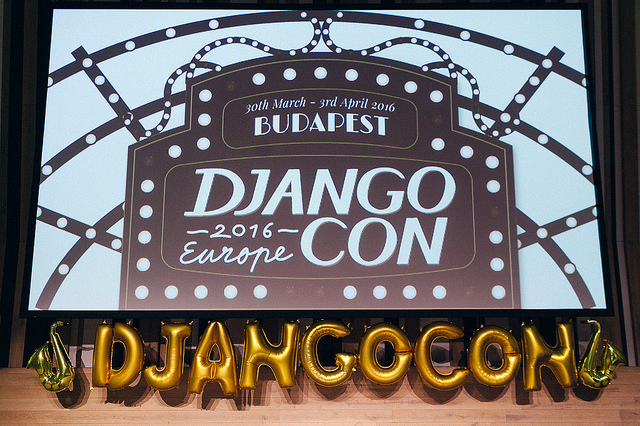 I am so late in writing this but it's with good reason. I was super busy. I still am but here you go...

I applied for financial aid to attend DjangoCon Euro. I never thought I would be approved but then I got the exciting news that I was chosen to go. I booked my ticket and went off to Budapest. I could write the whole post about how beautiful Budapest is but I'll save it for another time.

The theme was Jazz and Saxaphones and the organizers made sure everything followed suit, even the tweets. On March 29th I volunteered as a coach for Django Girls Budapest, which was a great event itself and my first time stepping into the role of Django Girls Coach instead of organizer. I had a blast!

The talks started from March 30 and finished up April 1st with two days of sprints following. You can check the details about the event here.

The thought that went into the planning was phenomenal. The first surprise was that the conference organizers set up a slack channel for all attendees. This was my first conference so I couldn't really compare much but I loved being able to ask about public transit, hotels etc. Everyone attending would have similar concerns or questions so it was a convenient way to communicate. The channel was used before, during, and after the event for questions or follow-up.

The organizers made such a successful effor to include everyone and make all attendees feel comfortable. There were vegan and vegetarian food options and care baskets in the bathrooms covering almost any emergency one could image. There were positive posters all around, designated people available to talk to for any problems that might occur of if someone felt uncomfortable. I never felt uncomfortable or needed most of these services but it was reassuring knowing they were available.

You can see in the picture we got some high quality, well designed goodies, including some awesome socks with saxaphones on them! Who doesn't want that?

There were talks for all levels, even mine! Some talks were a bit over my head but I could still follow along. I was surprised that some of the talks were actually things I was familiar with. The nice mix of different topics and styles made the sitting and listening for such long periods of time enjoyable. I took a lot of notes, so many notes! But finding the time to go back and do this tutorial or use this resource is difficult, because there were just Too. Much. Awesomeness!

You can watch all the talks here!

The Sprints and Workshops

I enthusiastically signed up for a lot of workshops, but I was late to my first one and the Wifi wasn't working well. That added to my exhaustion of three days of talks and small talk I called it quits. I went back for the second day and the wifi was working again, YAY! I was still tired but I at least was able to get some of my own work done.

I was at my frist conference by myself and from day 1 I found some other awkward kind soul to chat with. Luckily, I knew a handful of people through Django Girls but I was excited to finally put faces to names and catch up with people I had just been emailing with or stalking on twitter. The coffee breaks between talks were surprisingly exhausting, even for the excessive talker and outgoing person that I am. Even through the exhausting small talks, it was still nice to chat with diverse people, with various skills and backgrounds.

I was shocked when another first time attendee asked me how long it took for me to feel comfortable with my programming skills like I was a pro. Took?! It made me realize that we are all more similar than different with our struggles and challenges in different areas. I also saw other attendees in a different light. What used to feel like 'us and them' suddenly became a united 'us'.

The talks and community were so impressive, inspring and motivational that I decided to give it a try and sumit a proposal for DjangoCon US 2016. I was accepted and I wouldn't have been without the support and inclusiveness of the Django community.